It’s high time we read some Sandman for this show. No, not the the literal sand guy from Spider-Man. It’s the Neil Gaiman series that made Vertigo Comics famous.

We jumped straight into Volume 4: Season of Mists, which seems to be less about seasons and more about land ownership rights.

Then we keep reading Marvels: Eye of the Camera and we regret every second of it.

Whoa, Carnage is so Maximum it’s taking us two episodes to get through it. Spider-Man seems to be having a tough time getting through Maximum Carnage as well, because in parts 8-14 he really just can’t deal anymore. 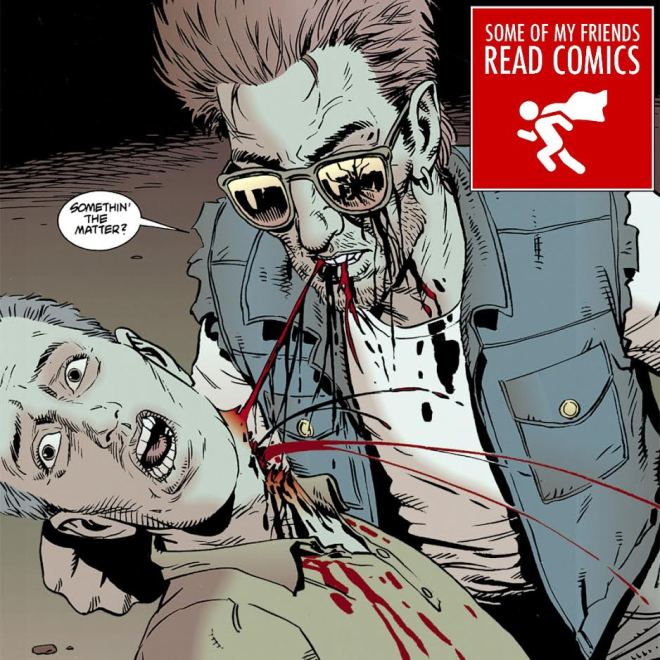 The television adaptation of Preacher just started its 2nd season, so we decided to read the first couple of stories from the classic Vertigo comic.

But does it hold up? Or is it yet another gore-fest from writer Garth Ennis?

Special guest Rob Robinson joins us to talk about angels, demons, aliens, vampires and arse-faces as we read issues 1-7 of Preacher.

Some of My Friends Read Comics 059 – Preacher

For being one of DC’s most important heroes, we sure haven’t given the Flash much attention.

We tried to remedy that by reading a classic Mark Waid story from the early 90s called The Return of Barry Allen, a story that manages to encompass every generation of the Flash.

You’ll get the modern Flash, Wally West. You’ll get the Golden Age Flash, Jay Garrick. And, of course, you’ll get the return of the titular Silver Age Flash… unless there’s a plot twist of some sort… but don’t worry, I’m sure that won’t happen…

Some of My Friends Read Comics 048 – Flash by Mark Waid

Can you believe the Black Panther is getting his own movie? Twenty years ago, most people had never even heard of him and now everyone’s going crazy for him!

To see where his rise began, we’re reading the late 90s reboot that put him on the map, written by Christopher Priest with beautiful painted art by Mark Texeira who is NOT the 1st baseman for the Texas Rangers.

Join us as we check out the first five issues!

If you’ve ever heard of The Clone Saga before, you probably know that it’s one of the most controversial storylines in Spider-Man’s history, and with good reason.

Originally planned to be a year-long event in the 90’s, it got muddled with so many loose plot threads among different writers that it ended up as a 3-year, 174-issue story that’s generally recognized as a stain on Marvel’s history.

In this week’s episode, the gang takes a look at 2009’s The Real Clone Saga which attempted to distill the story to the key points and tell it in the way it was originally meant to be told. But is it any good? Well we’re obviously not gonna tell you here, listen to the dang episode!!

Some of My Friends Read Comics 009 – Spider-Man: The Clone Saga